In 15 days, the scope of this country will change even more drastically than it has since donald trump was elected president four years ago. (I refuse to capitalize his name.)

Since then, I have personally struggled with ongoing depression, and I know I'm not the only one.
I long for the days when I won't feel like this. But in the meantime, every day comes with anxiety and fear that we will never recover from what's happened to our country, but more importantly, to ourselves.
We have become so divided that we argue over things that were once a given: things like science, medicine, truth and compassion. Now, some of us believe the most ludicrous conspiracy theories, vigorously promoting them, shouting "fake news" whenever trump denies a story that paints him in an unflattering light.
We have seen a surge in racism and hate, with armed militias "standing back and standing by."
We have seen friends and families separated, both physically and metaphorically.
I have lost many, but that's the sacrifice I've made to fight for what I believe in.
I know I am not alone in these feelings of despair, frustration, and sadness.
But, what is the answer?
Can we forgive those who have forsaken us? Can we move past the betrayals and the blatant attacks on our character? What if trump gets reelected? Will we heal? CAN we heal?
I'm not sure. And, I hate that.
I used to be so optimistic, floating around the world in a space of eternal hope, imagining that we were progressive, that we were moving forward, that we were EQUAL.
Boy, was I ever wrong. I've become quite the cynic.
About a year ago, I walked into a wall in the middle of the night and nearly knocked myself out. I ended up with a black eye and a bruised ego. The darkness around my eye faded, but it was replaced by darkness in my heart. Nearly every day, I feel like I've walked into that wall again, over and over like Bill Murray in Groundhog Day.
We can all agree that 2020 has been the worst year in the history of our lives thus far, so it would seem the only way to go is up. I'm not sure that's going to happen but we can still aspire to greater heights.
I do find some solace in watching the trump train head steadily toward the broken bridge, crashing and bursting into a fiery ball of orange flames...
It's no secret where I stand on this president...I HATE HIM. Pure unadulterated hate.
Yep, genuinely despise him.
I know I'm not alone in this feeling either.
The fact that he's a racist, bigoted, misogynistic, malignant narcissist with a history of sexual assault and zero moral compass might be the main reason, but what he's done to people I once cared for is what is the most troubling.
This man has given permission to throw all compassion and kindness out the window in favor of name-calling and division. He's given the White Nationalists the platform to spread their message of racism and supremacy. He's allowed foreign adversaries to ridicule and attack our troops, dismissing the bounties on their heads. He's been impeached. He's allowed dictators access to classified information. He's tweeted QAnon. His abuse of power is ongoing.
Perhaps his most egregious act thus far is how he's handled Covid-19. He's responsible for the deaths of 220,000 Americans (to date) due to his ineptitude on handling the worst Pandemic this country has seen since 1918. Just today, he's attacking Dr. Anthony Fauci in an attempt to discredit our nation's leading doctor on infectious disease. I truly hope and pray this alone will be his demise.
I could go on and on and on, but the list of his wrongdoings is endless and exhausting, just like his presidential term.
In 15 days, we have the opportunity to reset. To seek redemption and begin to mend the deep cuts and tears in society's skin that have left lasting scars.
I can say this much...I do have a glimmer of hope. I have faith that more people are good than bad, and that the loud minority who support trump will be silenced when Joe Biden is elected.
In the next two weeks, I will continue to campaign for the soul of this country, for our redemption. And, I hope that November 4, 2020 I will be writing a BLOG filled with excitement and optimism for the future and our collective recovery.
Until then, I am wishing you all health, happiness, wellness and peace.
And, for God's sake, don't forget your mask.
Oh and shit, if you haven't already done it...
VOTE! VOTE! VOTE! 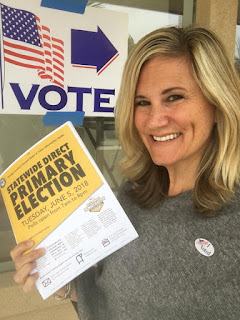