Putting Your Best Foot Forward...Most of the Time

I'll admit it.  I am guilty of leaving the house sans make-up and wearing work-out attire on a regular basis, like every morning usually.  The point being, I actually work-out at some time most days- preferably in the morning, although there are always exceptions.  Like today for example.  While my intentions were high, I discovered I was consumed by too many "to do's" to get the exercise done and wound up wearing my yoga pants and sweatshirt all day.

Including right now as I type this at 7:32 p.m. on a Wednesday night.  Oh well, shit happens.

But I guess what I am getting at is I started thinking about how casual we've become, how lazy we are as a society when it comes to our appearance. I think this is reflected in our young people and their showing up to school in PJ's for one, and to job interviews in torn jeans, smacking their gum, so ill-prepared for an interview, they don't even have a pen to fill out the application.  They wonder why they don't get hired.

I am trying to figure out exactly how and when this shift in attitude became so extreme.  I mean hey, I'm not saying one must iron his or her jeans (mom, yes you) but I am thinking the idea of putting your best foot forward seems to have left the cultural mainstream in general.  It seems like we are raising a generation of young people who couldn't care less about their appearance to those that obsess so completely over it, it becomes unhealthy.  I'm saying there has to be a happy medium, right?

Remember when travelers wore dresses, hats, gloves and slacks before taking a trip? Maybe not because I'm pretty sure that was way before I was born but maybe there's some of you more seasoned readers who might recall those days. Anyway, people were expected to dress appropriately or they would suffer the consequences. Not necessarily being thrown off a plane but certainly subjected to the disapproving scowls of the other passengers.   These days for women, dressing up to fly often involves a velour sweat suit with some sort of label sewn over the ass. Not exactly haute couture.

Juicy Couture maybe. But I don't think that counts.

On a recent trip with some friends to the Magic Castle in L.A., I overheard some young women complaining about the fact that cocktail attire was required for entrance to the classic Hollywood establishment. I think the allure of the whole place, its history and appeal was lost on this twenty-something who didn't see the need for such fancy duds.  I wonder if she would have felt more comfortable down the street at a club on Sunset rather than the historical mansion. Well, at least she was prepared for either since she had on a dress and a pair of heels.   I, for one, felt like a million bucks all gussied up.  I'm sure the rest of the gang felt great too and we all looked spectacular.  It was well worth the aches and pains in my feet the next day. 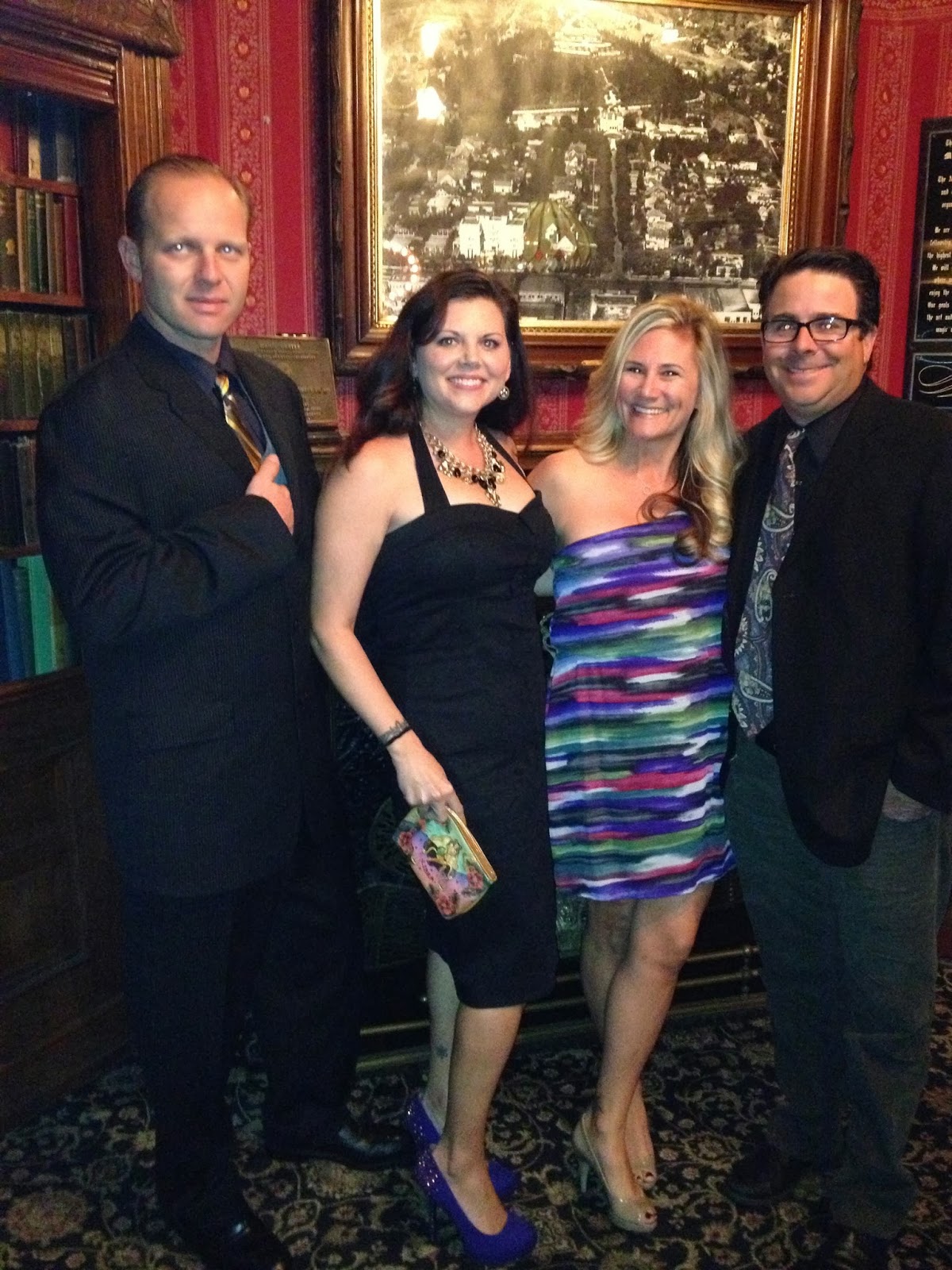 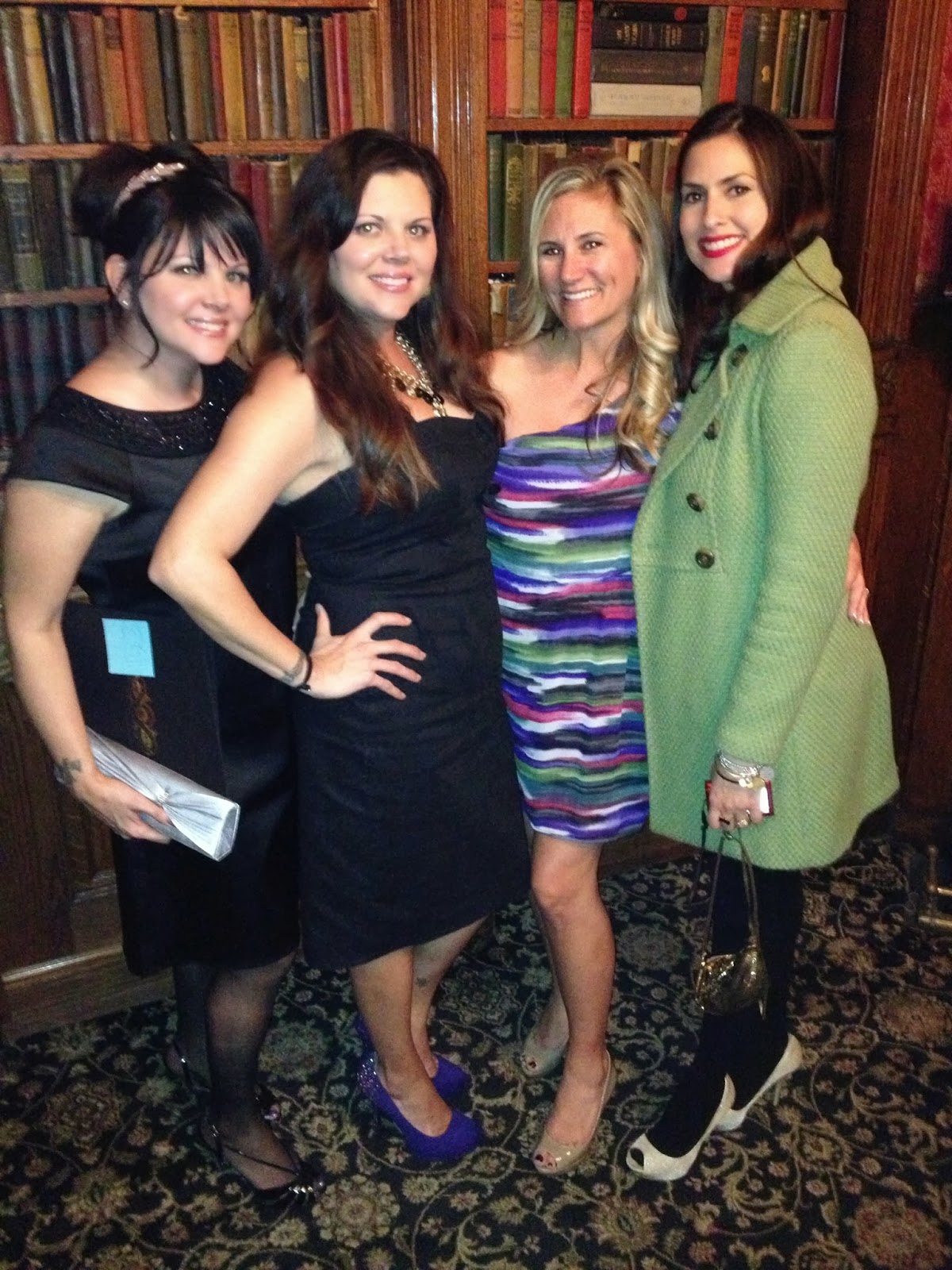 See? We looked pretty great if I do say so myself...

One of the things my Mom always taught me was to put my best foot forward because first impressions are important and you've only got one shot to make a decent one.  That being said (well written), I think it makes a difference in the way you feel about yourself, leaving the house in yoga pants, a t-shirt, hair tied up and sans make-up.  At least I know it affects my self-esteem, no question.  It's like the Seinfeld episode where George starts wearing his sweats and Jerry makes his usual snarky remarks about him "giving up." Well in a sense he's right.  Often on those days I feel like I've given up and indeed, it's not a good feeling.

I realize we live in a world that is overly concerned with appearance, especially those of us here in SoCal. Some may find what I've written offensive but hear me out.  Putting your best foot forward means taking the extra time to care about yourself.  It means that you see the value in feeling good on the inside and looking good on the outside, trying to find the balance between the two.

In spite of the fact that we shouldn't be judged by how we look, the truth is we are. I know it's harsh and sad but it's reality and if we can't take care of ourselves, how can we expect the next generation to?  Shouldn't we lead by example?  Shouldn't we take the time and make the effort to throw on a cute shirt and a pair of good-fitting jeans?  Maybe a little mascara and some lipstick or for the guys, a nice clean shave and some hair gel?  Just a few suggestions, nothing set in concrete.  And for the record, I like that light faux-beard look or a nicely trimmed goatee, just keep it neat.  Not much of a fan of the Duck Dynasty look (or the show and its stars ideals either).

It seems superficial but when you look at yourself in the mirror and you like what you see, your whole attitude changes and you feel ready to tackle the challenges of the day with just a bit more confidence. Agree?

When it comes to the kids, well they have their own fashion agenda~I know.  But giving them a reason to care about their appearance is not a bad thing, as long as it's done as a means to boost their self-esteem and confidence, not shatter egos.

I'm not suggesting we go back to the days of formal wear on the Pan Am flight to NYC, but I do think it might be a good idea to swap the pajama pants in favor of a cute little ensemble that makes you feel sassy and fun-guys that means you too.  It sets the tone for a good trip and you won't have to worry about the scowling elderly folk who fondly remember and long for the days of the fancy fashion-forward traveler.

So this lady in her yoga pants is signing off now, too late to hit the gym but still feeling pretty accomplished for the day in spite of the attire.

After all, tomorrow is new and a chance to start again.  Turns out when I try, I clean up real nice.

Cheers to 2014 and to putting your best foot forward.